In this article, we will continue as the Part 2 of our previous article.

Suleyman the Magnificient‘s wife Hurrem Sultan was as important and effective as the Emperor’s itself once upon a time. It was built by the Sinan the architecture for the Sultan and it is still one of the best places in Istanbul. The biggest bath-house (hamam) that was ever built by the Sinan, has gained a lot of popularity lately due to the Turkish soap operas and etc. It is open for a lovely hot bath inside of this unique atmıosphere. The buildings many original features have been preserved and because of this, it is one of the most original structures from the Ottoman Era. As we said before it is currently an active bath-house with highly trained professional masseurs. It has different men’s and women’s sections too.

During the Ottoman Empire, the palace was used by the admiral in chief to anchor his ships. But later on, the Dolmabahçe Palace become the palace that the Sultan and his family live. Moreover, the palace hosted the founder of the Turkish Republic, Mustafa Kemal Atatürk too when he came to Istanbul. It had hosted Atatürk till the end of his life, literally. The great founder passed away in Dolmabahçe Palace. Even though it has more important features historically, the Palace’s architectural features are worth seeing indeed. 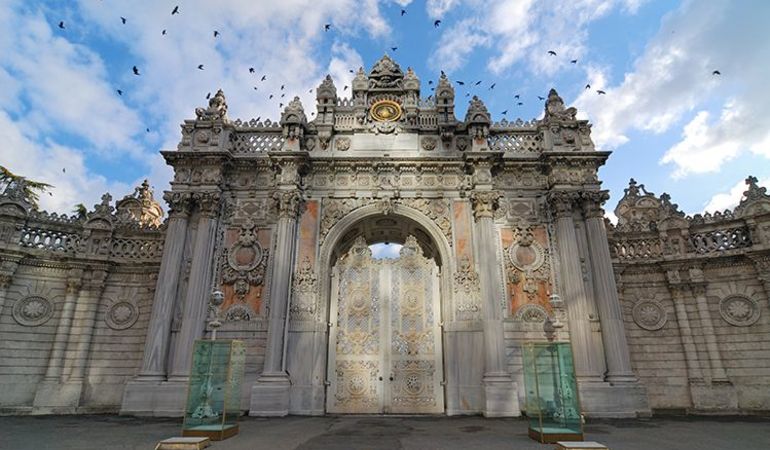 It has a long facade on the Bosphorus over 248 meters. Inside the Dolmabahçe, there are 285 flamboyant rooms including six steam rooms and 68 toilets. The construction of the palace cost approximately five million Ottoman gold pound which equals to 35 tonnes of gold and 14 of these were used in sheets to decorate the ceilings. Can you imagine the wealth? And in the great throne room, there is a spectacular gift from Queen Victoria, 725 bulb chandelier.

The Grand Bazaar, which is located inside of the Eminönü, is a popular destination for many local and foreign tourists with its historical tissue and many shopping opportunities. Grand Bazar resembles a whole city with an enormous space. It was built by the Mehmet the Conqueror for the people to sell what they had created.

Being flooded with hundreds and thousands of people every day, the Grand Bazaar is always active and alive. It is nearly impossible for one to cannot find what he/she is looking for inside of this unique market.

With its look both inside and the outside of Istanbul, the Princes’ Islands are one of the first water escapades of the city. All the islands have a special aura, nostalgia side, phaetons (which are being banned day by day because of the torture being made to the horses), and roads closed to the traffic is ideal for a weekend away.

There is, of course, a reason behind these called the Prince’s Islands. During the Byzantine Emperor era, many crowned royal member exiled to these islands away from Istanbul during that eras transportation conditions. Thus, many princes had to live in these islands and the island got its name.

You can just rent a bike and enjoy the nostalgia, do a picnic or watch the Istanbul in here.

It was first opened at the early 1930s and got Cadde-i Kebir name, later got its famous Istiklal Avenue title. It is and it will be one of the most popular avenues in Istanbul, even Turkey. Many of the foreigners chosen to stay in this area because of its metropolitan structure. With nostalgic structures, a variety of cafes and restaurants, entertainment venues, culture, and art centers, it has a specific place in Turkey’s heart.